Storage Speed on the PandaBoard

In my experience so far with the PandaBoard, I noticed that the system feels sluggish using the SD card.  I'm using a Class 6 SD card which means it can sustain 6 MB/sec writes.  The USB 2.0 bus is capable of a max 480 Mbps, or 60 MB/sec; in practice, USB tops out at around 30 MB/sec due to CPU overhead.  Still, that's quite a bit faster than the 6 MB/sec the SD card can do.  With that in mind, I wanted to compare the performance of the SD card against a USB 2.0 hard drive.

The bonnie++ tool is great for testing storage performance, so I installed it with a quick yum install bonnie++ and ran it against both the SD card and the hard drive.  I was using the 2.6.35-g6d019da-dirty kernel.

It's generally a good idea to store the output of bonnie++ on a different drive from the one being tested so as not to interfere with the results, so first create a RAM-disk:


[jbastian@fedora-arm ~]$ bonnie++ -d /tmp -n 0 -m "SD Card" -q 1>>/bonnie/bonnie.csv 2>/dev/null
It takes a while for bonnie++ to do its thing, so I fired it up and grabbed a bucket of popcorn and a movie.  When it finished, I ran it again on the USB hard drive: just change /tmp to /mnt/usb.  The output is just appended to the bonnie.csv file.


[jbastian@fedora-arm ~]$ bon_csv2html /bonnie/bonnie.csv > bonnie.html
I used tidy -i to reformat the HTML a bit so I could remove the columns for the file creation tests (which I did not run), and the results look like:


As I expected, the SD card clearly wins with random seek times: 663ms vs 7643ms.  This is one of the major advantages of flash storage over traditional spinning magnetic media since flash does not have to move a head over the disk and then wait for the desired sector to spin under the head.  It's interesting, though, that even with the significantly slower seek times, the hard drive managed to squeeze out 93.9 seeks/sec compared to only 27.4 seeks/sec on the SD card.

The throughput results are more interesting. On sequential output, the hard drive is the winner with 9017 K/sec compared to the SD card's 3125 K/sec.  Writing data is one of the weaknesses of flash storage since it has to re-write an entire block if you need to flip a bit from a 0 to 1. For sequential input, the SD card managed a respectable 17598 K/sec vs the hard drive's 12357 K/sec.

Overall, the SD card performs nicely on large sequential reads, but the USB hard drive seems to outperform it in general usage.  Unfortunately, neither drive came close to the 30 MB/sec I was hoping for.

On an SD card, the rates should be constant since there is no spinning disk.

The zcav needs access to the raw device, so I'll run it as root.  Again, store the zcav output in the RAM disk so it doesn't interfere with the testing.  I only tested the first 8 GB of the hard drive since the SD card is only 8 GB in size, and also because testing all 200 GB would take all day! 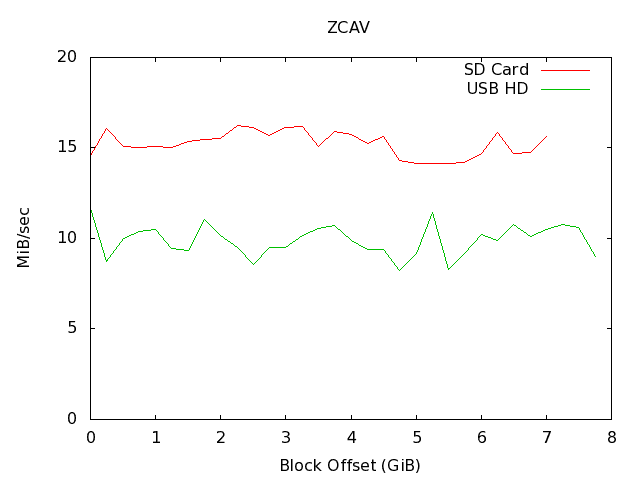 For comparison, I ran bonnie++ on a desktop system (Core 2 Quad @ 2.66 GHz, 6 GiB RAM, 320 GiB SATA hard drive) running Red Hat Enterprise Linux 6.1 and it had a nice 58 MiB/sec for sequential writes, 72 MiB/sec for sequential reads, and a 1066ms latency for random seeks.  Here's the full set of numbers compared to the PandaBoard:


My conclusion: I will continue using the SD card to hold the root filesystem.  I was hoping to get a performance boost out of a hard drive, but I think the USB bus is the bottleneck for the hard drive.  Hopefully the PandaBoard 2.0 (or whatever it will be called) will have a SATA port on it!
Posted by Jeff Bastian at 13:40