A PandaBoard Desktop with Fedora 13

A serial port console, while nice and simple to work on, is a little lacking for eye candy, so today I installed X Windows and Xfce to run a desktop on my PandaBoard.

The installation was the easy part:

yum -y groupinstall Base 'X Window System' 'XFCE' 'GNOME Desktop Environment'
And then it was hurry-up-and-wait while it installed 421 packages.

When it finished, I rebooted it and found a few problems that I had to fix.  The default resolution for the display is a safe 640x480, so I had to add a kernel command line option to make it 1280x1024: omapfb.mode=dvi:1280x1024MR-24@60.  I also added another console=tty0 option so both the serial port and the display could be consoles.  The last console parameter is the primary console and for now I kept the serial port as primary for easier debugging.

I noticed ntpdate was failing to set the clock.  I tried running it manually and noticed it couldn't resolve the hostname 0.fedora.pool.ntp.org.  A quick peek at /etc/resolv.conf showed that NetworkManager had re-written the file with nothing but comments because I have /etc/sysconfig/network-scripts/ifcfg-eth0 set up for a static IP address for now.  So I disabled NetworkManager with chkconfig and cleaned up resolv.conf and rebooted once more.

This time it almost worked.  It went through all the boot scripts cleanly, but it got stuck when it should have started X11 and gdm.  Fortunately the serial console still worked, so I logged in and discovered that the /etc/rc.d/rc script was still running and starting up runlevel 5, but it didn't seem to be doing anything.  I then found it was waiting for /etc/rc.d/rc5.d/S99local to finish (aka /etc/rc.d/rc.local).  I looked at this script and remembered the "ugly hack" I had to set up back in April to run agetty on the serial port.  It was running in a never-ending loop which means it will never finish and the init scripts will never start X11.

The Fedora ARM page no longer mentions this ugly hack, so I guess the bug has been fixed and I can use a normal upstart job to manage agetty on the serial port.  I commented out the hack in the rc.local script and created a new /etc/init/serial-ttyO2.conf job:


[root@fedora-arm ~]# cat /etc/rc.d/rc.local
#!/bin/sh
#
# This script will be executed *after* all the other init scripts.
# You can put your own initialization stuff in here if you don't
# want to do the full Sys V style init stuff.

[root@fedora-arm ~]# initctl start serial-ttyO2
serial-ttyO2 start/running, process 20245
One final reboot and ... Hooray!  It ran through the firstboot setup and then launched X11 and gdm.  I logged in to Xfce and launched Firefox and a Terminal.  I now have a completely silent desktop! 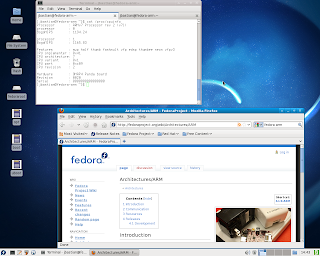